Thousands of people are lauding the sons of Living Fuel founders for a great acapella version of the National Anthem.

These are just some of the comments from the thousands of people who have heard the KAJ Brothers beautiful acapella version of the The Star Spangled Banner. Many have said it's the greatest version of the classic song they've ever heard.

Helen Lee – "I've always loved acapella and these guys do a beautiful rendition."

The KAJ Brothers are Kyle and Austin Craichy and Johnny Atys. This amazing group of young men were featured artists at the Miss Florida Pageant last month in St. Petersburg and released The Star Spangled Banner just days later.

"I'm really excited about our latest release," Austin Craichy said. "I am proud to be an American, so naturally, this song is quite special to me."

Austin said that when the KAJ Brothers were working on the song and video (produced by award-winning producer and director Kyle Saylors), they wanted to strip the song down to strictly vocals (acapella) so the power of the lyrics would be illuminated.

"If you close your eyes and really listen," Austin said, " you can see the song. This is what music is meant to do."

Kyle Craichy is also excited about how well their new version of The Star Spangled Banner has been received.

"Our country has had a lot of issues come up that seems to be dividing us and we wanted to do what we could to bring everyone together as Americans," Kyle said. "This is one of those songs that brings us together as Americans no matter what is going on in the country; politics are set aside, just uniting under our amazing flag."

The KAJ Brothers are an amazing, talented trio of young male artists who have crafted a unique style of harmonies and sophisticated Pop/R&B sound that distinguishes itself by its reinvention of romance filled orchestral sounds similar to Michael Buble', Harry Connick, Jr., Frank Sinatra, N’Sync, Boyz II Men, and Kenny Rogers. The multi-talented Orlando based trio consists of 21-year old Kyle Craichy, vocals, piano, guitar, and dance; 19-year old sibling Austin Craichy, vocals, piano, guitar, drums, and dance; and 29-year old Johnny Atys, vocalist and national dance champion, who rounds out the group. Kyle and Austin were born in Tampa and raised in Orlando, while Johnny is originally from Paris, France.

The KAJ Brothers regularly work with Orlando's renowned producer/vocal coach Gerry Williams who crafted the boy band sound for N'Sync and The Back Street Boys.

To arrange press interviews with the KAJ Brothers, contact Mark McGee at mmcgee(at)livingfuel.com. 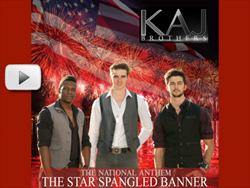