Sean Astin (Lord of the Rings and Goonies) Tweeted Emilyann Girdner’s The Labyrinth Wall Just in Time for Luminous Word Press’ Launch of the Sequel, The Haunted Realm, in November 2015

The Labyrinth Wall by Emilyann Girdner is a young adult book set in a magical epic fantasy world like The Hobbit but with a dark dystopian feel and it is written to be a quick read reminiscent of The Hunger Games. Emilyann has said before that she wanted to write an imaginative fantasy series that is a fast read for modern busy lifestyles. She imagined a story about a teenage girl (Araina) that is part of an entire race of people created to serve their makers within the labyrinth world. Subject to the repression of a hostile civilization within the dark labyrinth, all Araina knows is servitude until she witnesses a man unlike any she has ever seen with supernatural powers emerge magically through a wall into her world. Having realized for the first time that there must be more than the labyrinth, she is left to solve the mysteries of who the stranger is, why he has special abilities and what is on the other side of the labyrinth wall through which he came.

In The Haunted Realm, the riveting continuation to the story, Araina again faces a series of seemingly impossible magical obstacles as she and her friends search for answers about their Creators and their magical labyrinth world. At the Barnes & Noble The Haunted Realm book launch event, fans will be able to meet the Author, grab a signed book, make memories in an Obsidian Series photo booth and more. Fans of the series can sign up at the links included at the end of this article to reserve their book for the book launch as well as sign up for the Author’s newsletter for online pre-order updates.

*Agents, publishers, producers and members of the press are encouraged to contact PR(at)thelabyrinthwall(dot)com for Author and book series inquiries 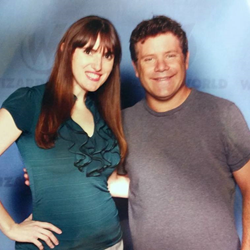