Give Kids The World Village, along with The WALT DISNEY WORLD® Resort, is offering a once-in-a-lifetime chance to win a one-night stay in the iconic Cinderella Castle at Disney’s Magic Kingdom® Park, in Orlando, Florida, USA.

Give Kids The World Village, along with The WALT DISNEY WORLD® Resort, is offering a once-in-a-lifetime chance to win a one-night stay in the iconic Cinderella Castle at Disney’s Magic Kingdom® Park, in Orlando, Florida, USA.

The Central Florida-based nonprofit, Give Kids The World Village provides dream vacations to critically-ill children. As part of their fall fundraising campaign, they will sell chance-to-win tickets online from September 18 to October 13, 2017.

The winner and up to five guests will receive a one-night stay in the Cinderella Castle Suite – complete with a royal breakfast – and two-day WALT DISNEY WORLD® Park passes. Airfare to and from Orlando will be provided by Give Kids The World Village.

Disney’s Magic Kingdom Park Cinderella Castle embodies the beauty and elegance of a 17th century castle but features the comforts of a 21st century grand hotel. The Cinderella Castle Suite is a luxurious, private hideaway that accommodates up to six people. It includes a cut-stone floor, mosaic art, rich hardwood paneling, and stunning stained-glass windows.

For many Disney fans, a night in the Cinderella Castle Suite would be a dream come true – just as a week in Orlando is a dream for children served by the Village.

GKTW President and CEO Pamela Landwirth said she was overwhelmed by Disney’s generosity.
“Words alone cannot begin to express our heartfelt gratitude to our friends at Walt Disney World,” Landwirth said. “As a founding partner of Give Kids the World, Disney has touched the lives of all of our precious guests, creating magical memories to last a lifetime. This amazing package will generate a spectacular fundraising event in support of our mission.”
The contest runs from September 18 to October 13, 2017. Contestants should visit Omaze.com/castle to purchase chances and to read more about the contest.

Omaze is an online fundraising platform that helps nonprofits raise money by offering exclusive experiences and merchandise. In the past, it has worked with organizations such as UNICEF, the American Cancer Society, and the National Multiple Sclerosis Society. This is the first time Give Kids The World has partnered with Omaze.

Give Kids The World provides meals, transportation, nightly entertainment, and complimentary passes to Orlando’s world-famous theme parks and other attractions. There is never any charge to visiting families, and no child is ever turned away. 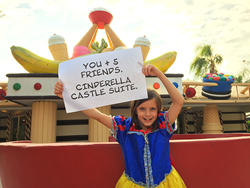