Win tickets and meet an astronaut

In 1998, Florida attorney, John Morgan, founded the first of what would become a national chain of educational indoor amusement parks, all inside of an eye-catching, upside-down structure. Fast forward two decades to 2018, four more of its kind are flourishing across the nation, and WonderWorks Orlando is celebrating its 20th year on International Drive on the weekend of March 2nd.

“To say I am proud to have reached the 20-year mark with WonderWorks is an understatement,” said owner and founder, Attorney John Morgan. “I worked in attractions during college, and observed all of the moving parts it took to make a successful theme park. I knew an educational element, along with affordability, could bring something original to tourism in Orlando.”

Leading up to the big anniversary weekend, WonderWorks will host the biggest ticket and prize giveaway in the attraction’s history to thank their many supporters including area tourists, educators, locals, and residents. Entries for the giveaways are flooding in and include the following:

1. For Schools: Win a Visit from a NASA Astronaut

Schools can enter to win a visit from Don Thomas, accomplished NASA astronaut. Astronaut Thomas will give presentations on space travel, take photos, and answer student questions during his visits.

2. For Businesses: Win Tickets for You & All of Your Co-Workers

WonderWorks will give away 2 tickets per employee to several local businesses, with staff sizes of all kinds, both large and small. Winners will be notified on a surprise visit from a WonderWorks team member and their mascot, Professor Wonder.

3. For Everyone: Photo Contest to Win Tickets for the Next 20 Years

WonderWorks is looking for pre-twentieth-century photos of or at the attraction from the years 1998-1999. One lucky winner will be granted free admission for the next twenty years.

“Over the past two decades, tourists and locals have shown that they really love what we have to offer,” Morgan humbly states, “we can’t thank everyone enough, for their unending support.”

Along with the regularly enjoyed interactive exhibits during the 20th anniversary weekend, NASA Astronaut Don Thomas will give presentations on space exploration inside WonderWorks on Saturday, March 3, 2018. Tickets for the presentations can be found on the WonderWorks Orlando website.

The team at Wonderworks continually seeks ways to keep up the attraction’s innovative edge while maintaining its foundation of delivering enjoyable ways to experience STEM education.

Over the past 20 years, WonderWorks has seen the likes of top athletes and celebrities, but at its foundation, owes its success and widespread growth to the tourists and Central Florida residents.

To find out more about Wonderworks’ 20th Anniversary and to enter in the ticket giveaways visit: https://www.wonderworksonline.com/orlando/20th-anniversary/
###

WonderWorks the upside-down adventure, is a science focused, indoor amusement park for the mind, that holds something unique and interesting for visitors of all ages. There are four floors of non-stop “edu-tainment,” with over 100 hands-on and interactive exhibits that serve a STEM educational purpose to challenge the mind and spark the imagination. WonderWorks Orlando is also home to The Outta Control Magic Comedy Dinner Show/ WonderWorks has locations in Orlando, Pigeon Forge, Myrtle Beach, Panama City Beach, and Syracuse. 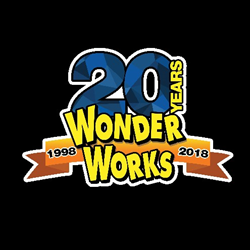